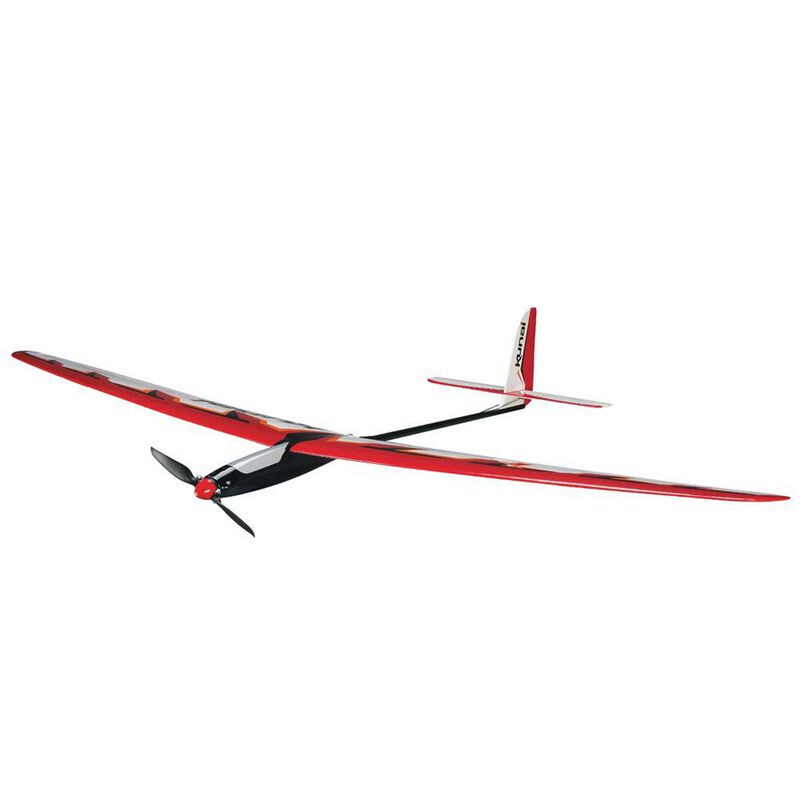 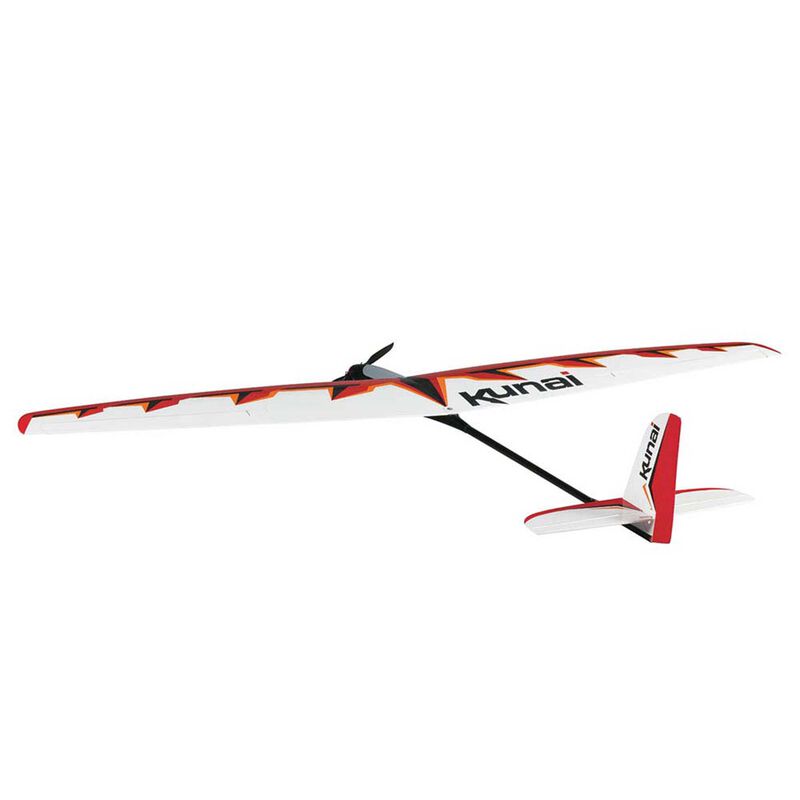 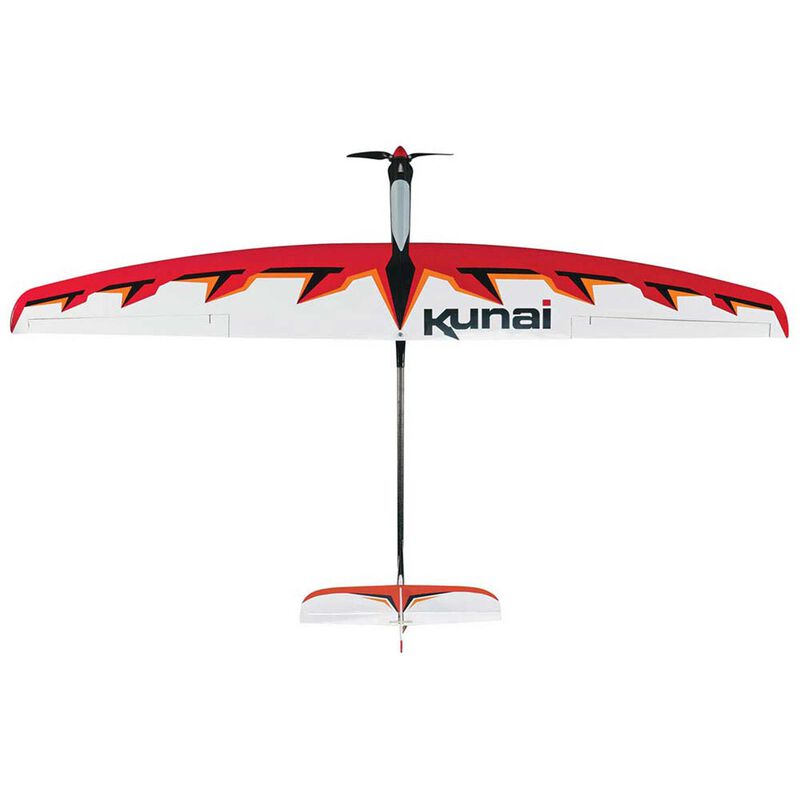 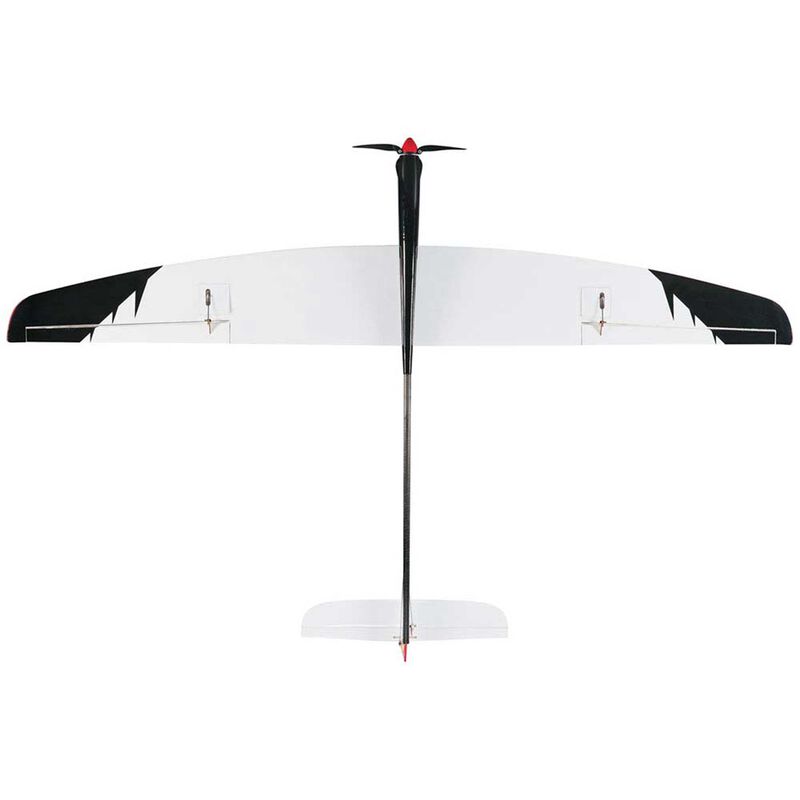 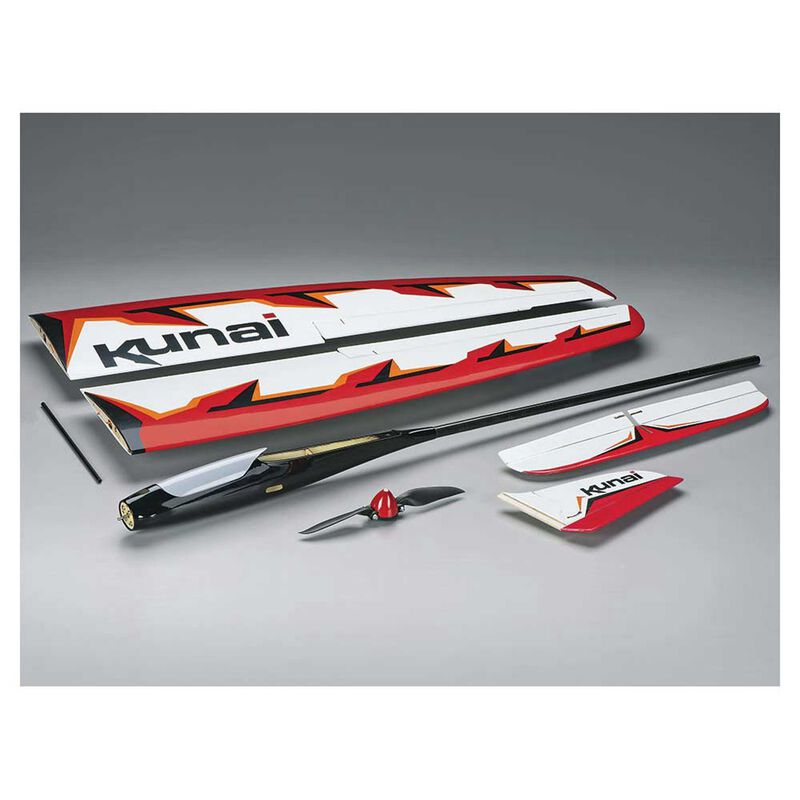 Share
The link to Kunai 1.4M Sport Glider EP ARF 55" has been copied
Email when back in stock

Relaxed soaring...aggressive climb performance...exciting, high-speed aerobatics. The Kunai offers the best of all worlds! Four-channel control accommodates all sport aerobatic maneuvers and allows the use of optional spoilerons or flaperons. The Kunai’s designers kept the parts count low for quick, straightforward final assembly. A great-flying model that looks awesome — and is ready for fun FAST.

Powered by
4.3 star rating 4.3 3 Reviews
write a review
(2) (0) (1) (0) (0)
Show all reviews
write a review
Thank you for posting a review!
We value your input. Share your review so everyone else can enjoy it too.
share
share
share
Thank you for posting a review!
Your review was sent successfully and is now waiting for our staff to publish it.
write a review
Sort: Select
Updating Results
Verified Reviewer
0.0 star rating
09/23/20
Review by Anonymous User
On
share ' Share Review by Anonymous User facebook facebook Share Review by Anonymous User twitter twitter Share Review by Anonymous User LinkedIn linkedin Share Review by Anonymous User
09/23/20
Was this review helpful? 0 0
A
Alpest 5.0 star rating
08/15/18
Intro to sailplanes
Review by Alpest on 15 Aug 2018 review stating Intro to sailplanes
Great little sailplane, handles wind very well, I purchased the arf and made some minor mods and used good mini servos, performance and duration are great for the price. Highly recommend.
On Kunai 1.4M Sport Glider EP ARF 55
share ' Share Review by Alpest on 15 Aug 2018 facebook facebook Share Review by Alpest on 15 Aug 2018 twitter twitter Share Review by Alpest on 15 Aug 2018 LinkedIn linkedin Share Review by Alpest on 15 Aug 2018
08/15/18
Was this review helpful? 0 0
J
Jdy7777 5.0 star rating
01/29/18
A Kunai is a type of throwing knife.
Review by Jdy7777 on 29 Jan 2018 review stating A Kunai is a type of throwing knife.
A fun to fly model and a definite crowd stopper at the field. It is quite fast and has it's own aerobatic style- kind of slash and run. It also slows down a glides fairly well, it's not an endurance glider by any means but it has a decent glide. Slow rolls and 4 point rolls are fun with it, loops can be amazingly tight or a hundred plus feet tall if you wish. I have my timer set at 4 minutes at power above 25% but the actual flight time can be much longer than that when gliding is added. If anyone takes it out for slope soaring post a video please.
Assembly was mostly straightforward but yes, the radio/battery/ESC installation takes some effort as others have pointed out. I went with a Turnigy Nano Tech 1000 3S, a Great Planes 25A Silver Series ESC, LemonRX 6 channel DSMX receiver and EMAX 9g servos. I did add two pieces of soda straw hot melt glued to the sides aft if the servo tray to keep the RX from touching the pushrods- the rods route through them but don't touch. I have the RX mounted on it's side and it is between the straws. There is very little room for the RX behind the servos.
I did have one problem, the magnets that secure the hatch did not touch so even the slightest movement would cause it to come off. The magnet in the fuselage was too deep. I was able to trim around it and install another 1/16th thick magnet on top. After that, the hatch closed with a &quot;click&quot; and was secure. Just to be safe I added a braided fishing line leader that would keep the hatch from blowing completely off. So far no such problem has happened and now I don't think it will.
My aileron servo leads are plugged directly into the RX and when I am attaching the wing I am feeding the slack wire up into the wing. Fully assembled the model fits easily into my Prius. I generally won't be taking it apart.
My final setup was to trim the elevator for the best power off glide, then setup a throttle/elevator mix to stop the power on zooming (throttle up, elevator down). I'm using a Spektrum system and I set up the model as ACRO so I could access the Flaperon menu. I chose a three position switch to control it where 0=off, 1 =Flaperon and 2=Spoileron. I flip to Flaperon to gain a bit of glide when soaring then toggle the switch again to set Spoilerons for landing. The Flaperon menu provides an elevator mix to trim the model level, works well for the Spoilerons also, just moving in the other direction. Doesn't take much flaps to do the job but I'm using all the Spoilerons and thinking about re-trimming for more.
I flown it enough times to tell you it is fun model to fly. The Kunai has a rather unique sound in flight when at speed. I see now why some have set it up for 4S batteries, I may also. I think the Nano Tech 1000 4S will fit with only a bit of trimming in the hatch area.
Kunai has no difficulty with wind and that is one of the reasons I wanted it. I was right, it is a very good any conditions model. With flaps or spoilers activated be careful, it will tip stall but it recovers quickly. While it is not a beginners model I think most could handle it- but it is fast so things happen quickly.
On Kunai 1.4M Sport Glider EP ARF 55
share ' Share Review by Jdy7777 on 29 Jan 2018 facebook facebook Share Review by Jdy7777 on 29 Jan 2018 twitter twitter Share Review by Jdy7777 on 29 Jan 2018 LinkedIn linkedin Share Review by Jdy7777 on 29 Jan 2018
01/29/18
Was this review helpful? 0 0
E
Easy 3.0 star rating
11/26/17
Nice but tricky
Review by Easy on 26 Nov 2017 review stating Nice but tricky
A nice flying glider but a very tight squeeze where the motor/ESC and battery are installed. Must be careful the insulation on motor leads do not wear when the motor spins. This happened to me. The 850mah is sufficient for long flight times.
On Kunai 1.4M Sport Glider EP ARF 55
share ' Share Review by Easy on 26 Nov 2017 facebook facebook Share Review by Easy on 26 Nov 2017 twitter twitter Share Review by Easy on 26 Nov 2017 LinkedIn linkedin Share Review by Easy on 26 Nov 2017
11/26/17
Was this review helpful? 0 0