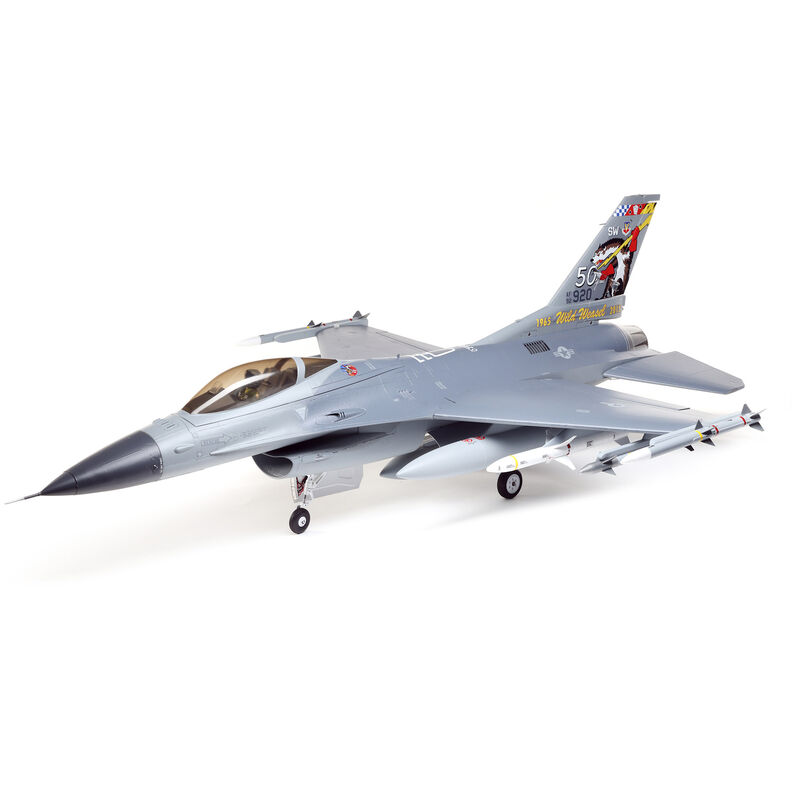 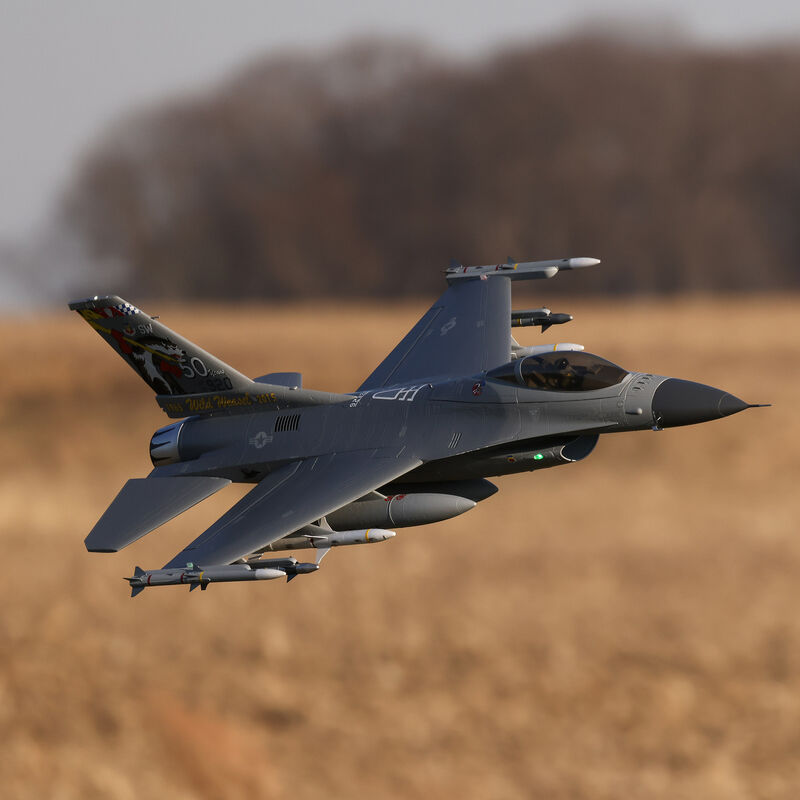 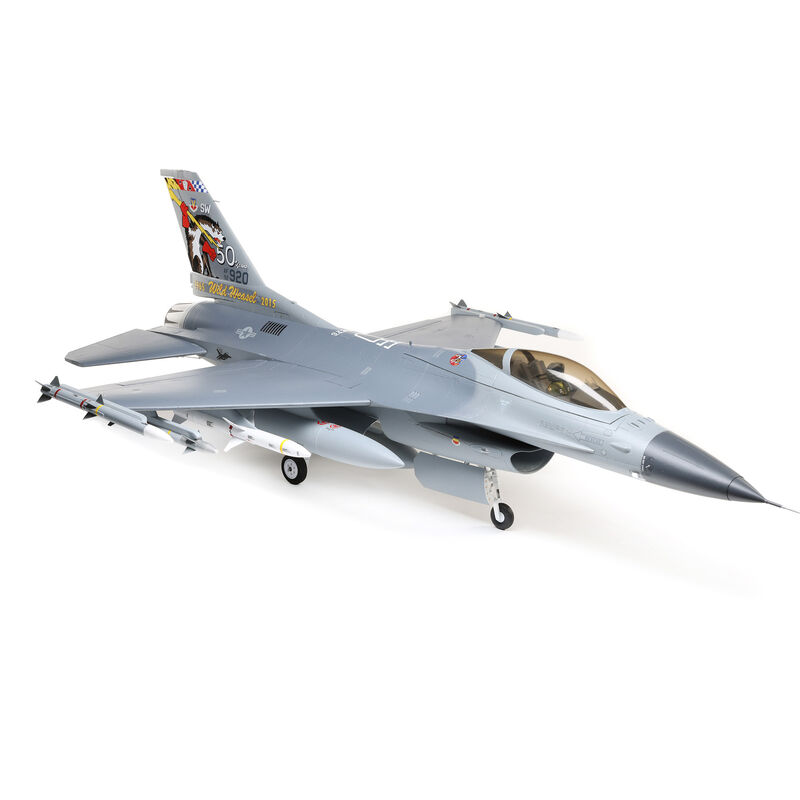 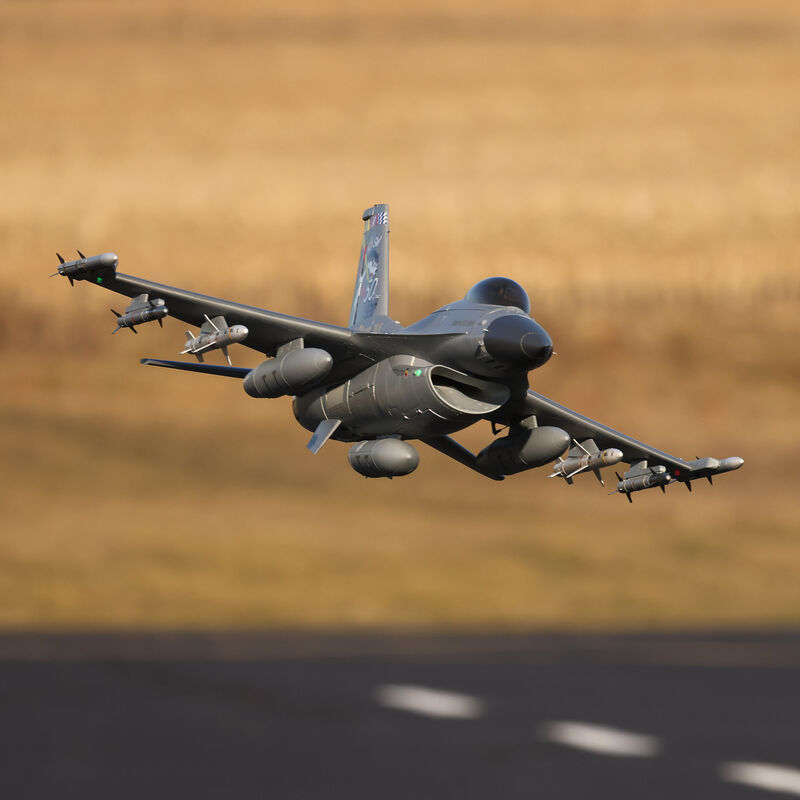 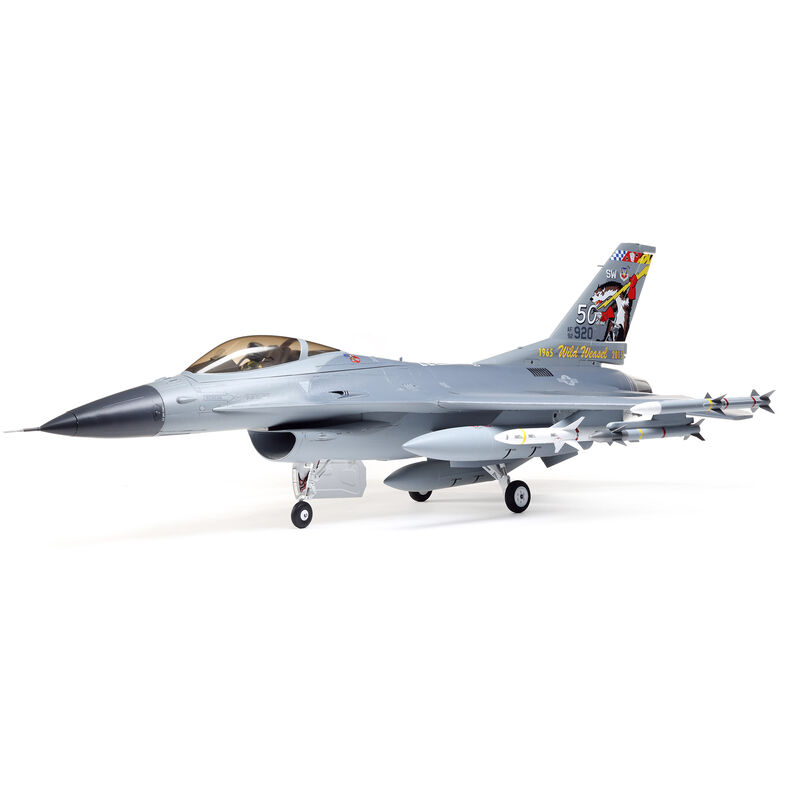 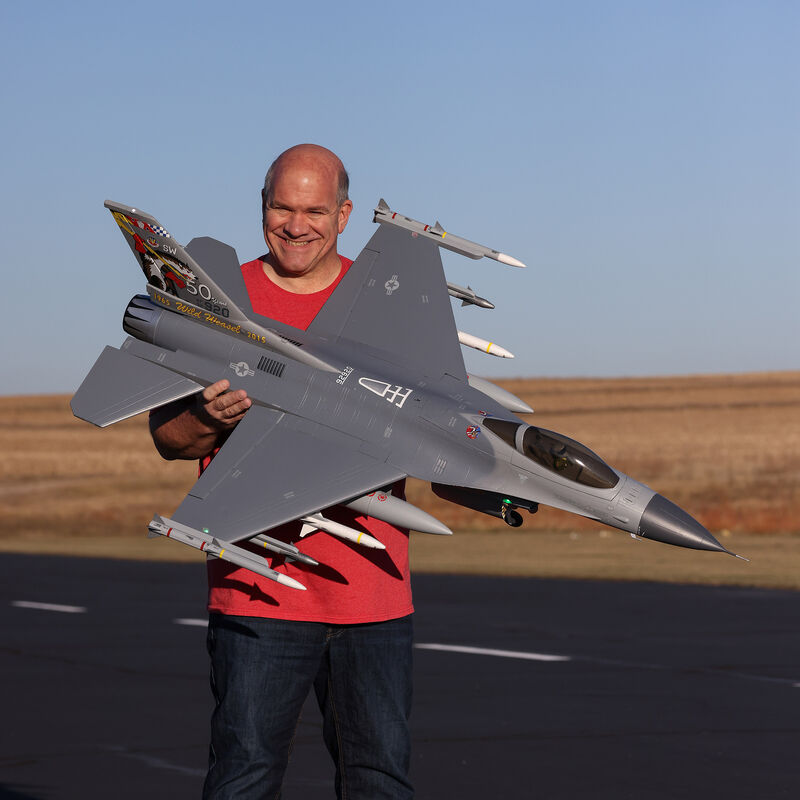 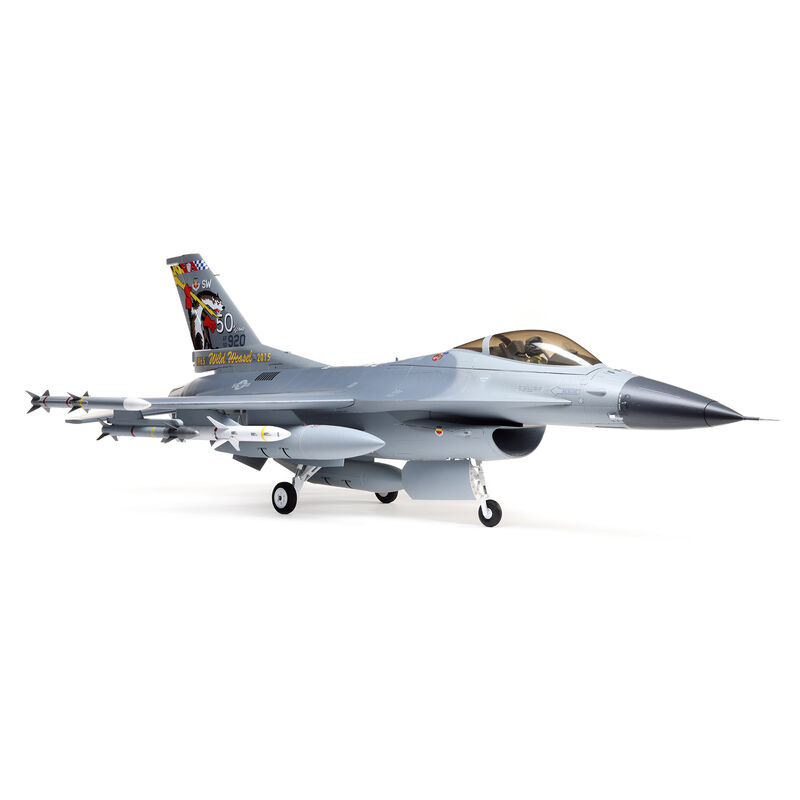 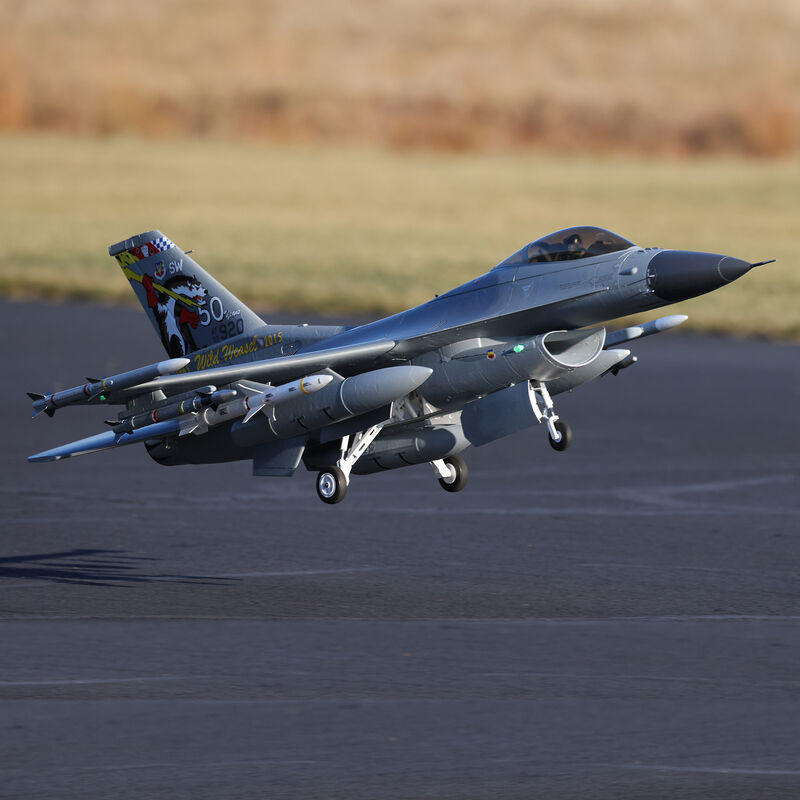 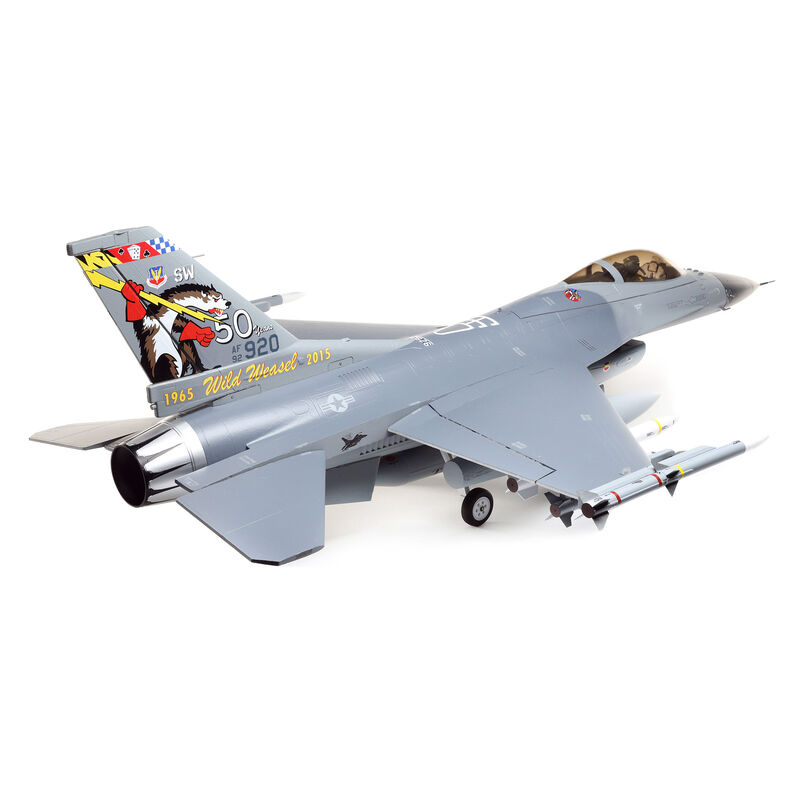 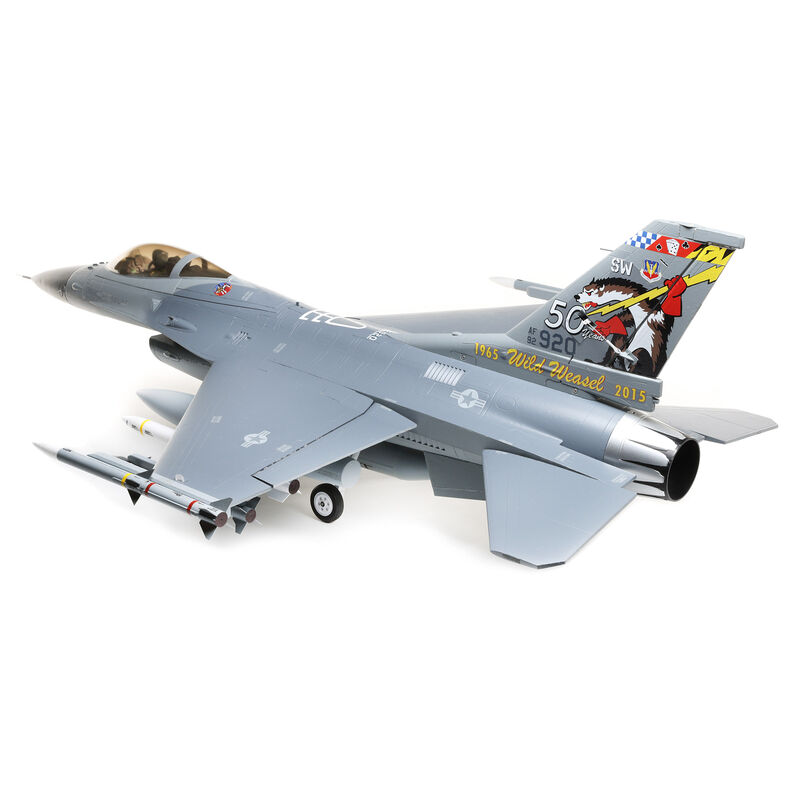 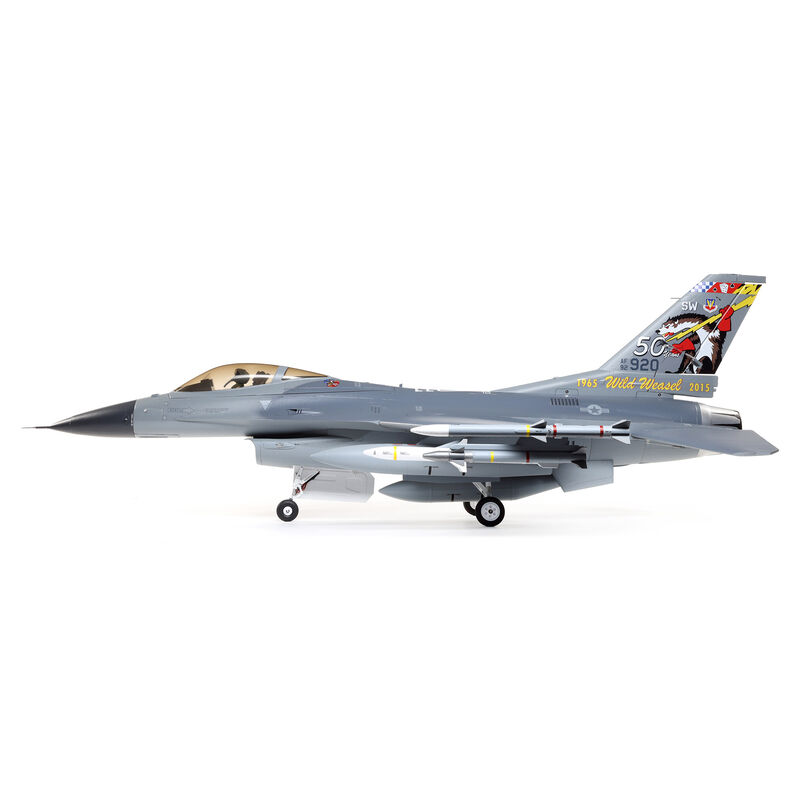 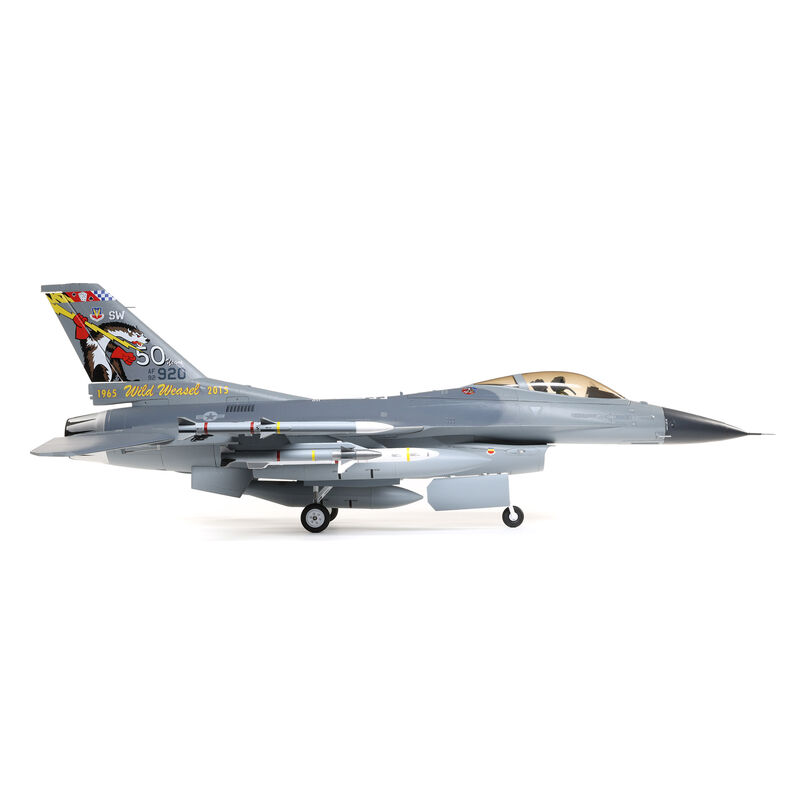 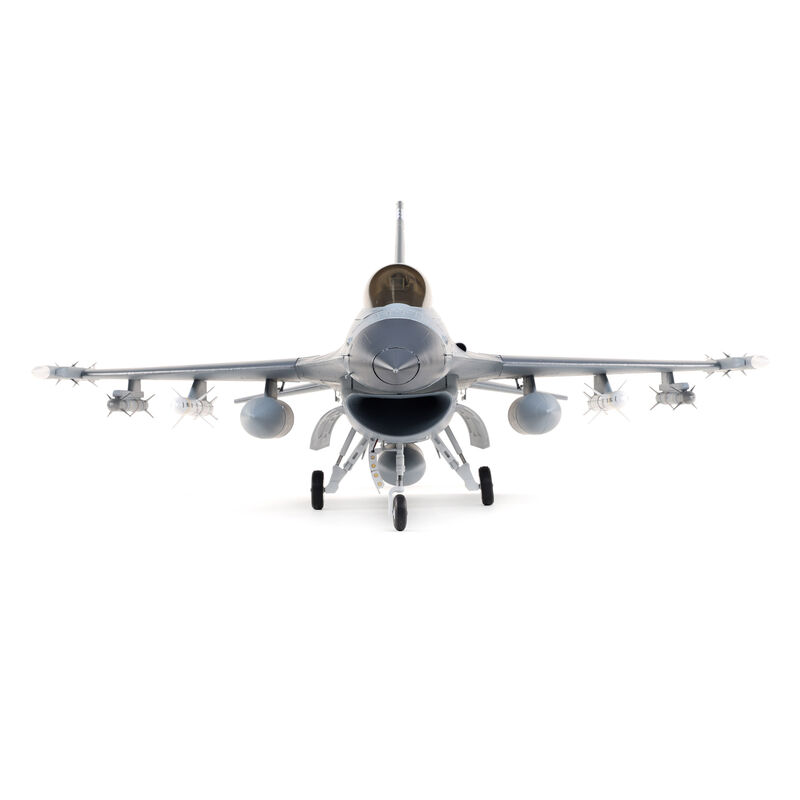 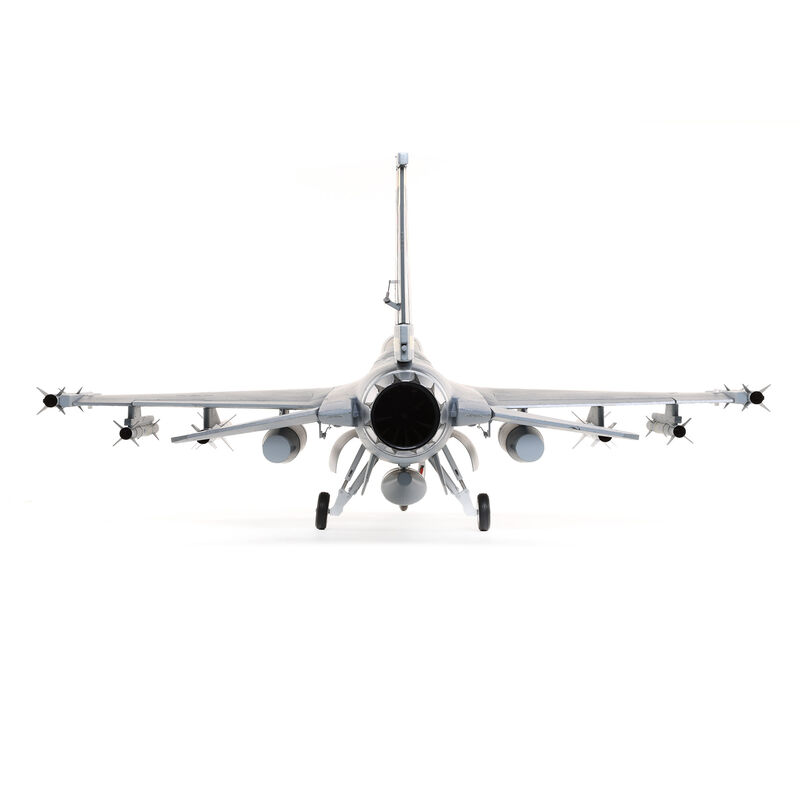 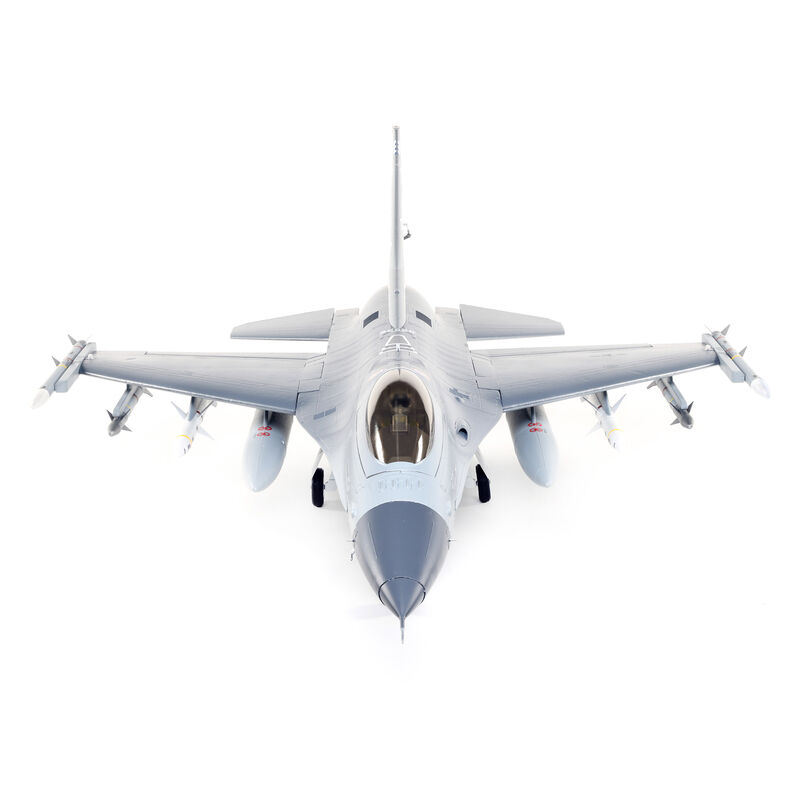 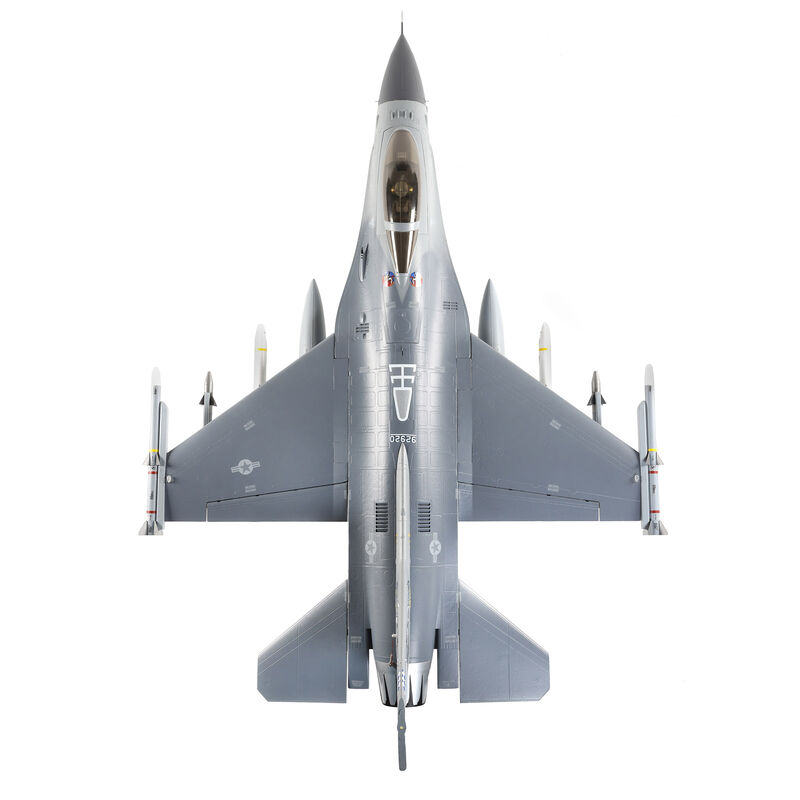 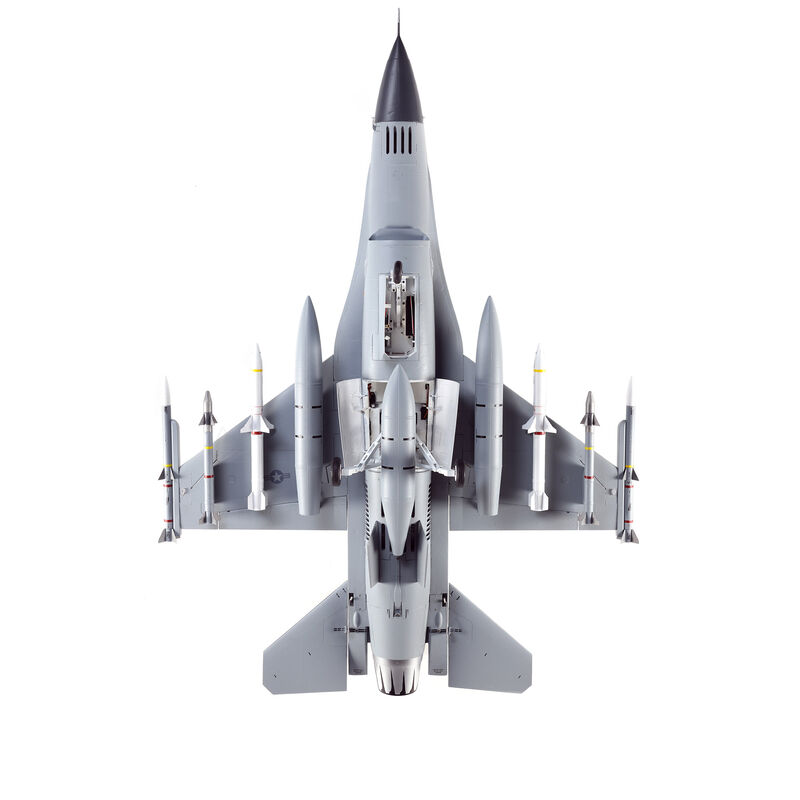 Item No. EFL87870
This Item is No Longer Available

The E-flite® F-16 Falcon 80mm EDF jet is the Smartest, most detailed and best handling high-performance model of the fighter yet! Its all-new design combines Extra Scale details, functional features and more to deliver an unmatched flying experience. 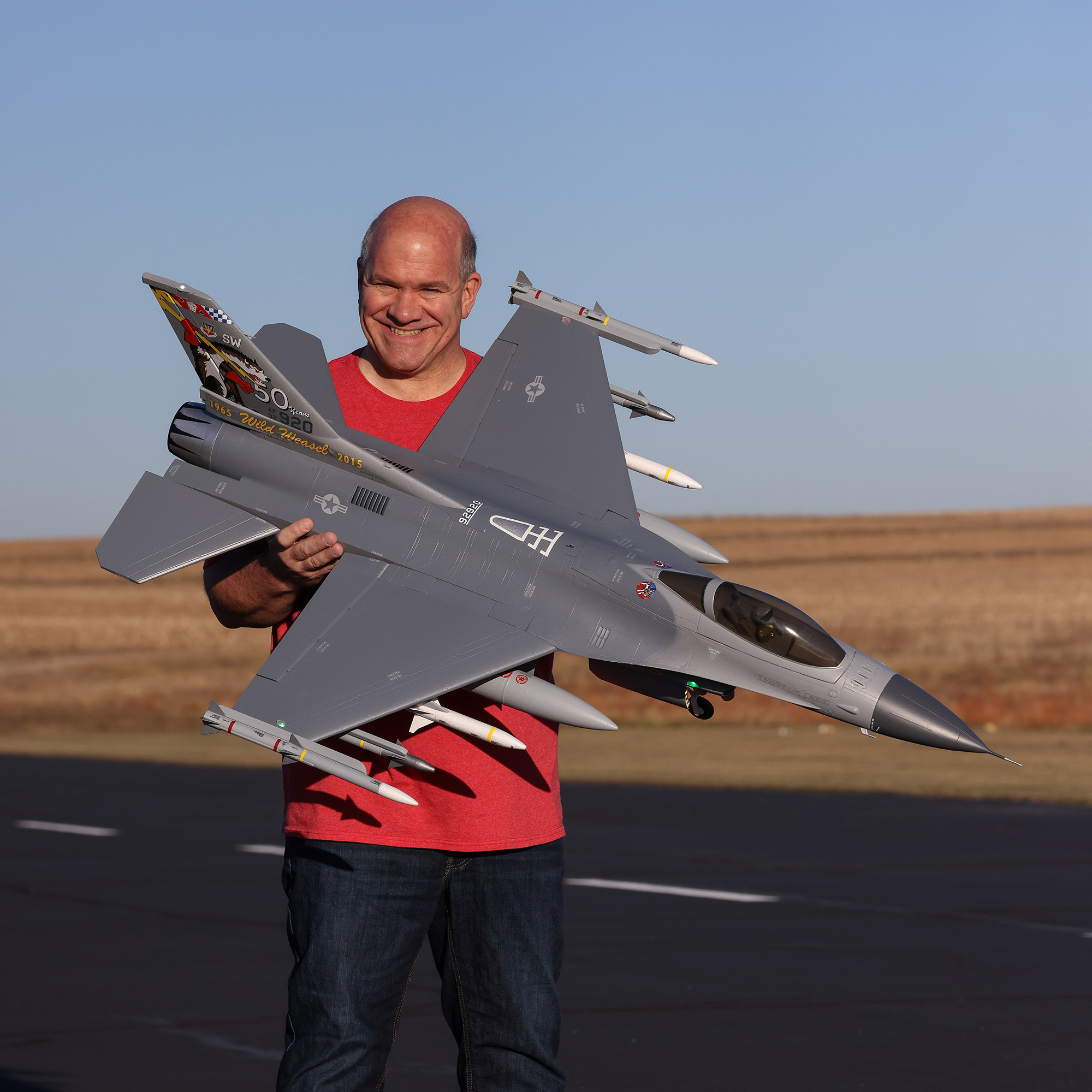 The F-16 Fighting Falcon was originally developed for the U.S. Air Force and approved for production more than 40 years ago. This multirole fighter’s advancements in technology and capabilities have kept it active to the present day with air forces worldwide. The E-flite® F-16 Falcon 80mm EDF (Electric Ducted Fan) is an Extra Scale model based on the single seat F-16C variant which entered production in 1984. The F-16C brought improved cockpit avionics and radar for all-weather capability with beyond-visual-range AIM-7 and AIM-120 air-to-air missiles. This replica is nearly as large as other 90mm EDF models, yet the efficient power system delivers better overall performance and longer flight times when using common 6S 4000–7000mAh batteries. The 3-tone gray finish is easy to customize using your choice of the included squadron markings while Extra Scale details and functional features — including the most scale-like landing gear installed on an F-16 EDF model yet — combine to deliver an unmatched flying experience!

The E-flite® F-16 Falcon 80mm EDF jet is the Smartest, most detailed and best handling high-performance replica of the world-renowned fighter yet! Extra Scale details, including molded-in panel lines, simulated antennas, indicators, sensors, optional-use ordnance, and more take realism to the next level. Functional Extra Scale features include LED navigation and landing lights, full-flying stabs, sequenced gear doors plus the most scale-like retractable landing gear installed on an F-16 EDF model yet. Constructed of durable, fully-molded EPO, this F-16 assembles without glue and can be ready to fly in less time than other similar class models!

Power It Your Way

The ARF Plus version is ready for you to install the power system of your choice (sold separately). You can easily install a directly compatible 80mm V1 or V2 fan unit, motor and ESC from other E-flite or FMS models without the need for any modifications, or you can potentially install other suitable power systems too. 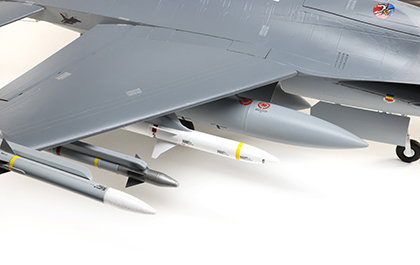 The F-16 Falcon 80mm EDF features an accurate outline and an abundance of Extra Scale details including molded-in panel lines and hatches, simulated antennas, indicators, sensors and much more. And, unlike other similar class models that require you to spend more to buy them separately, it includes a full complement of optional-use and easy to install/remove ordnance including six missiles plus three drop tanks. 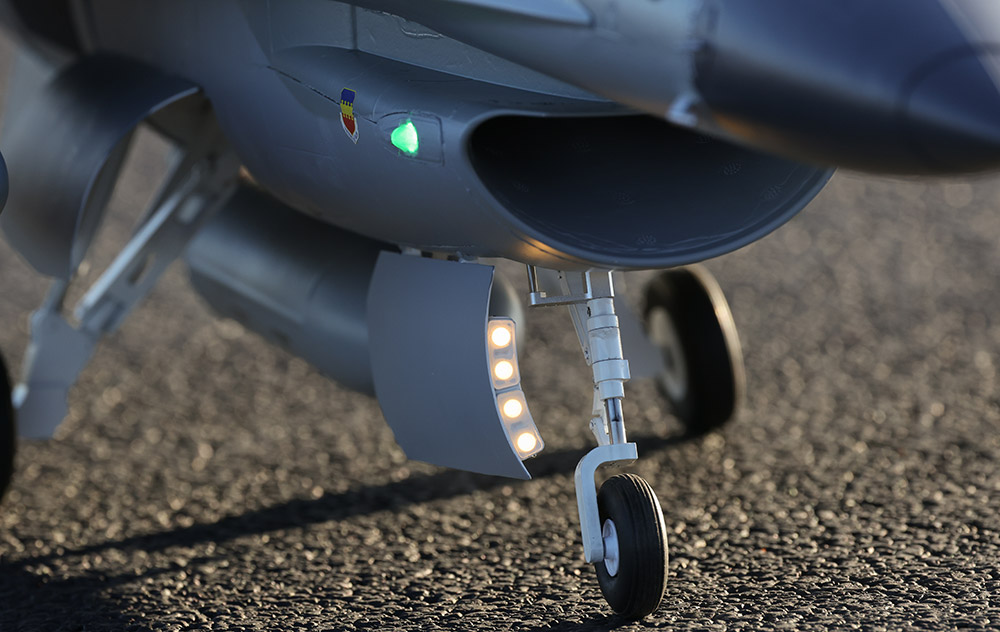 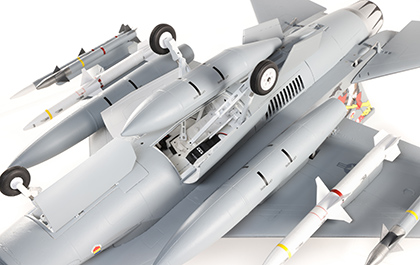 The reliable, factory-installed electric retracts are equipped with durable metal components including Extra Scale painted, articulated and shock-absorbing struts. It's the most scale-like landing gear installed on an F-16 EDF model yet! The sequenced and servo-operated gear doors feature molded details on the inside, and the nose gear door is also equipped with an LED landing light that turns on and off automatically when the gear is extended or retracted. 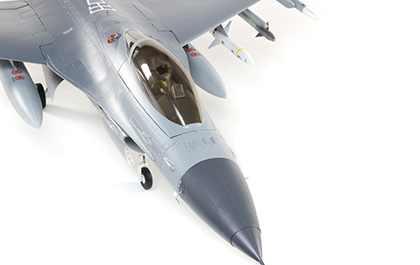 Construction with fully molded EPO material makes it possible to replicate complex details and shapes in a lightweight yet durable form. The result is an outstanding scale appearance that's easy to maintain and delivers the best possible flight experience. Plus, the plastic capped strakes, hatch edges and opening improve durability to prevent damage and paint chipping during handling and when installing/removing batteries. 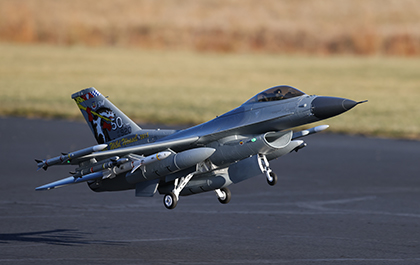 A total of nine factory-installed digital, metal-geared servos, along with ball-link equipped linkages on all primary flight controls, deliver crisp, precise and reliable control at every speed. 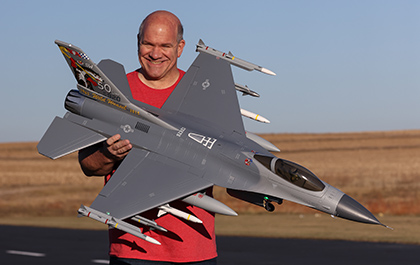 No glue is required for assembly and you can have the F-16 ready to fly in less time than it takes to charge a battery! The stabs plus the two-piece wing bolt into place and can easily be removed for convenient storage and transport.

Decal sheets with four different choices of squadron markings are included so you can customize the factory-painted 3-tone gray finish. The choices include: