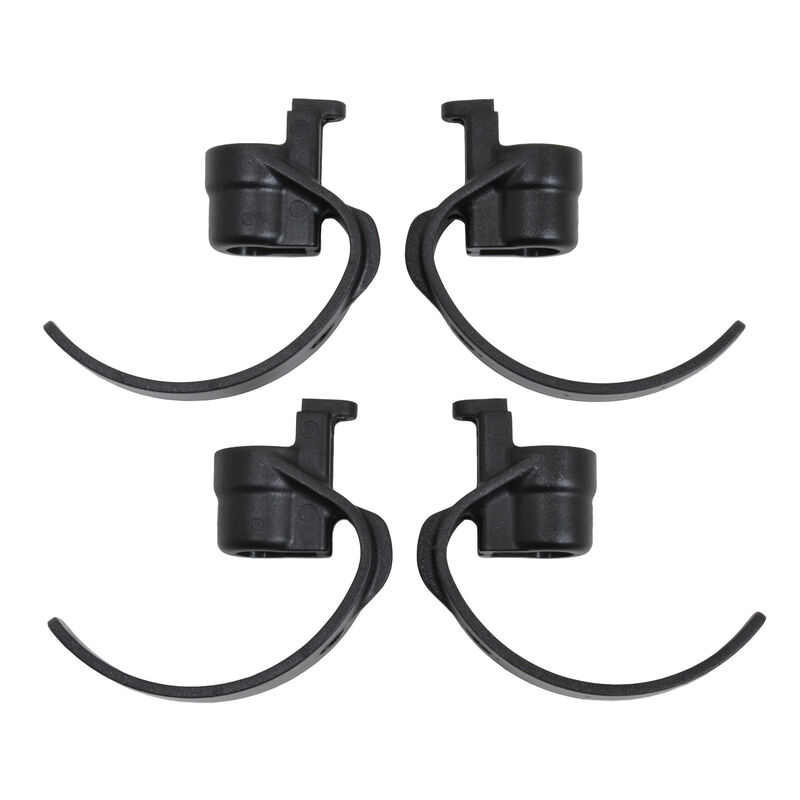 The Dromida Vista and Ominus are geared towards the entry-level flyer so there's a need for more cushion in the landing system. The stock motor cover with the small rubber foot, doesn't have enough cushioning effect to save a harsh landing and adds the possibility of damaging the motor or gear system if the cover breaks or shifts during a crash. The stock motor cover is somewhat short as well, leaving the possibility of a blade strike in tall grass a distinct possibility.

RPM Landing Gear for the Dromida Vista and Ominus solves both of these issues and many more. Our versions replace the motor cover and rubber foot with a solidly mounted, curved "spring" made from our engineering grade, ultra-lightweight nylons. The curved "spring" adds impact-absorption to the airframe, helping to reduce or eliminate damage from those questionable landings. Our Landing Gear also elevates these quads by an additional 0.63" (16mm) on the Ominus, 0.26" (6.5mm) on the Ominus FPV and 0.55" (14mm) on the Vista and Vista FPV, reducing the probability of a blade strike in grass or during bad landings.

RPM Landing gear also spreads the center point of each leg further out by 0.36" (9mm) on each leg, adding much needed stability to take-offs and landings. We also curved the ends upwards making them less likely to catch or hook when one leg is grounded and the other three airborne. Our last challenge was to keep the landing gear lightweight. For the ground clearance increase, stability and added crash protection gained with RPM Landing Gear, the entire set-up adds as little as 2.4 grams* to the total weight of the quad, causing minimal to no performance effects to overall battery life or flight characteristics.

Note:RPM Landing Gear is sold in sets of four and replaces Dromida #DIDE1126, #DIDE1164, #DIDE1180 & DIDE1220. A Phillips head or "crosshead" screwdriver with a maximum shaft diameter of 1/8" (3.1mm) is needed to install the Landing Gear. * Actual weight gain or loss varies by quad. Weight variation takes into account the weight loss by removing the original motor cover, rubber foot and any additional screws (Vista FPV) then adding the RPM Landing Gear weight.